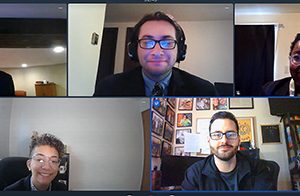 The team competed February 26-27 and March 5-6. The team’s hard work leading up to the tournament paid off, as Highland had one of its strongest showings at the state tournament in years — winning three state championships and earning several additional awards.

“The 2020-2021 season has been unique and challenging in so many ways, but this team has truly persevered through every obstacle and embraced every opportunity to improve from tournament to tournament,” said Harry Bodell, Highland speech instructor and forensics coach. “I could not be prouder of these four exceptional students. Not only have they made Highland proud through their competitive successes, but more importantly, they have made Highland proud through their strong character and commitment to the values of family, advocacy, and scholarship that this program is built upon.”

The team’s results are as follows:

As the speech and debate season enters its final stretch, the team is preparing for the Phi Rho Pi Regional Tournament on March 19-20 and the Phi Rho Pi National Tournament on April 5-11. Current Highland students can still get involved, and several scholarships are available for the 2021-2022 season. For more information about joining Forensics contact Harry Bodell at harry.bodell@highland.edu.