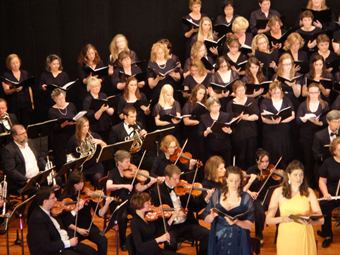 The Chorale is comprised of 80 singers plus accompanist and draws its members from over a dozen communities in the northwest Illinois, southern Wisconsin region. Its members represent a diverse demographic cross section of the population, including professionals, businesspersons, and students.

The Highland Chorale, which marked its 20th anniversary in 2013, provides an opportunity for serious singers to develop, create, produce, and perform a diverse repertoire of choral masterworks and contemporary compositions of the highest quality.

The Chorale has performed in major national and international venues. In 1994 the Chorale toured Austria and Germany for the first time, performing several concerts in Vienna, Salzburg and the Austrian countryside. The highlight of the tour was a performance during High Mass at the Salzburg Dom.

In 1996 the Chorale toured Italy, Austria and Germany, with performances in Rome, Florence, Venice, Salzburg and Munich. During this tour the Chorale was invited and sang during High Mass at St. Peter’s Basilica at the Vatican.

In 1998 the Chorale was chosen by audition to sing an all Brahms program at Carnegie Hall in New York City under the baton of the internationally renowned German conductor, Helmut Rilling.

During the summer of 2000 the Chorale completed their third European tour, which included performances in Germany and Austria.

In addition to the tour concerts the Chorale performs regularly on the Ferguson Fine Arts Center stage. Each fall they present a program titled “Broadway In Concert,” which features repertoire from the American Musical Songbook including works by George Gershwin, Cole Porter, Rodgers and Hart, Oscar Hammerstein and Leonard Bernstein. Recent performances include music from “Les Miserables,” “The Lion King,” “Cabaret,” “Guys and Dolls,” “Ragtime,” and numerous others American Musical Theatre classics.

The Chorale also performs major choral works with our orchestra each season. “Weihnachts-Oratorium,” J.S. Bach, “Carmina Burana,” Carl Orff and “Amahl and the Night Visitors,” Gian-Carlo Menotti are some examples of this type of work. Compositions by Brahms, Mussorsgy, Bizet, Schubert, Mozart, Beethoven, Verdi and Palestrina have also been included in recent concerts. The Chorale sings in German, French, Italian, Latin, Russian and, of course, English. The Chorale also regularly programs works from the catalog of American Folk Songs and Spirituals including the music by Moses Hogan, William Dawson and Alice Parker.

The Highland Chorale was chosen as the official Illinois recipient of the Continental Harmony Millennium Music Project Grant, which was funded by the American Composers Forum and the National Endowment for the Arts. This new music initiative, part of the White House Millennium Celebration, culminated in a performance of an original work by local composer Patrick Beckman and local poet Dan Smith in May 2000.

See http://www.composersforum.org/ for more information on the Continental Harmony Project.