James Berberet, executive director of the Highland Community College Foundation for six years, recently announced his retirement to the Foundation Board of Directors.

Berberet has been associated with Highland Community College since 1968, when he was hired to teach Journalism and English Composition.

After two years of teaching and being responsible for news releases for the College, Berberet was appointed director of community relations. After that, he served as dean of training and manpower under the federal government’s Comprehensive Employment and Training Act (CETA) for four years, until departing for the business world in 1979. One year later, Berberet was appointed to the HCC Foundation’s Board of Directors.

Berberet recalls, “As a Highland employee I had the privilege to work closely with Don Opel, one of the founders of the Foundation and its first executive director. I looked forward to joining the board.  Little did I know I’d be on the board for almost 31 years, let alone be president for almost 20 years.” 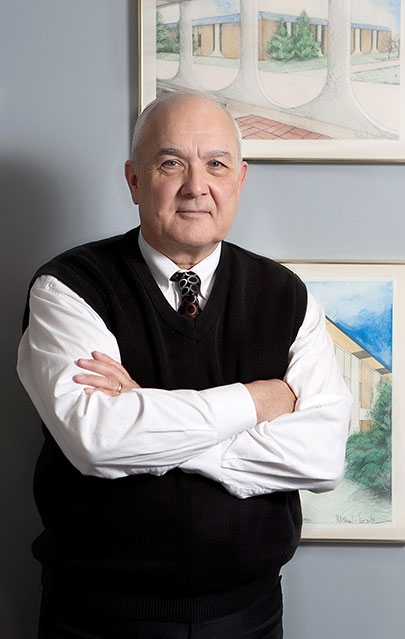 In 2009, Berberet stepped down as President only to fill a newly created position of Immediate Past President. In 2011, following his then-recent retirement as President and COO of Ultrasonic Power Corp. in Freeport, the Foundation Executive Committee voted to “unretire” him and named him executive director of the Foundation.

Current Foundation President Todd Weegens has served in various capacities along with Berberet since 1993. Weegens states, “Chief among the many reasons I have continued my involvement with the Foundation for so long is directly related to Jim. I have never in any capacity of my professional and/or civic activities witnessed anyone as devoted to an organization as he is to Highland Community College. From my perspective, Jim bleeds Cougar blue and orange.”

Berberet said that his target retirement date is this fall, but that there are several major goals that need to be accomplished before then:

– Assisting with the transition to an incoming executive director. “Fundraising is a relationship business, getting to know and understand individuals (and/or their businesses), what they want to donate to and why. What motivates them to invest in Highland is important.”

– The annual Shindig will be held in August. “This is our major fund-raising event of the year. We have an excellent Shindig Committee which each year develops themes, finds venues, makes all the food and beverage decisions, secures live and silent auction items and handles many of the details. But as E.D., I am still responsible … and they always put me in charge of weather.”

– The Million Dollar Matching Scholarship challenge. “This new and exciting fund-raising effort, in conjunction with the Community Foundation of Northern Illinois, will be a primary focus of my remaining time. I want to meet this challenge or at least be far enough along that all it needs is the finishing touches on it.”

Several accomplishments stand out from Berberet’s tenure as a board member and president.

– 1984:  Don Opel Regional Arboretum, a 210-acre outdoor collection of 4,500 trees, shrubs, and groundcovers, was officially named. In addition to the formal plantings, the arboretum also includes a natural pond, prairie, and woodland areas.

– 1988: Endowment Challenge Grant – Raised $500,000 to be matched by federal funds; these funds were required to be invested for 20 years and are now valued at more than $6 million.

– 2000: the Family YMCA of Northwest Illinois, the Foundation and College collaborated to erect a child care training center. The Foundation contributed $380,000 along with an additional $140,000 from donors toward the $850,000 facility.

Berberet added, “As President of the Board, we also approved the “Growing for tomorrow … changing lives today” major gift campaign in late 2008, just as the nation was being hit with a major financial crisis. That effort culminated in the construction of the 13,694 square-foot Ray and Betty Stamm Health Science Nursing Wing. Subsequently, the campaign was expanded to incorporate the Wind Turbine Technology facility and program. To date, more than $4.7 million has been raised toward a goal of more than $6 million.”

The HCC Foundation has a strong basis of donor support and a significant endowment (approximately $21 million currently). Many buildings on campus have been “named” via naming rights donations. Student scholarships and grants to the College have grown steadily.

Weegens added about Berberet that “his dedication to HCC was unquestioned through his many years of continued volunteer service and the successes accumulated. However, it may be his willingness to follow up his retirement from the business sector and become the executive director of the Foundation that stands out for me. At the time, the Foundation was in need of some steady leadership within the organization and Jim has provided that and more, much more, for the past six years.”

Berberet said, “Shifting from a board member to the chief executive of any organization can be a challenge and doesnâ€™t happen very often. The roles and focus, timelines and relationships are all different, and challenging. An analysis of our donor base revealed that most were residents of Freeport and Stephenson County. Research and personal knowledge of northwest Illinois indicated that support for higher education also existed outside of this immediate area. Those resources just hadn’t been tapped.”

As a result, the Foundation started its outreach and information program. “Showcase Highland” exposed communities like Galena, Shannon and Mt. Morris to various educational and cultural aspects of HCC. With the help of then-new Director of Fundraising Kim Rampenthal, “Lunch with the President” was initiated and connected College presidents Joe Kanosky and Tim Hood with civic and business leaders in communities like Elizabeth, Savanna, Galena, Warren, Oregon and others, and some even lunched in the Presidentâ€™s Office on campus. We also began to secure speaking engagements with area Rotary, Kiwanis and Lions clubs and other civic and service organizations and area chambers of commerce.

Berberet stated, “Our philosophy was that people give to what they know about, what they understand. People outside Freeport needed to know more about the College and how the Foundation provides critical support to the College.”

To further educate the public in northwest Illinois, particularly Jo Daviess County, the Foundation partnered with the HCC Fine Arts department and Chestnut Mountain Resort to showcase “The Madrigal Dinner” as a fundraiser for three years in December. More than $25,000 was raised and used to sponsor fine arts and music and vocal students on a performing trip to Germany and Austria in May 2016. A more recent partnership with Eagle Ridge Resort and Spa and the Fine Arts Department featured the famous Royal Scots in a “Jazz Cabaret” dinner and show fundraiser.

As executive director, Berberet has observed a seismic shift in fund-raising philosophy and objectives. “It used to be that we’d be the recipient of large donations, sometimes restricted for a specific purpose in an endowment and others unrestricted, allowing the Foundation to put the funds to work as it thought best served the College needs.”

“Recently the emphasis in donating has shifted to a greater interest in programmatic support. Donors will help fund a Hospitality Management start-up program, support a rejuvenated Ag program, invest in a special accreditation process for the nursing program, direct funds to music, theatre and fine arts, and donate to Leadership program scholarships. And part of this is a result of a serious reduction in state funding to higher education…which is likely to continue.”

As a result, it is anticipated that more comprehensive funding challenges will continue to be presented – and campaigns to be developed specifically to meet those needs.

The Major Gift Campaign is still short of its goal of more than $6 million. Contributing to it is the Double Play challenge, where every dollar donated is matched up to $50,000 each year by an anonymous donor in Jo Daviess County, which is in its fifth and final year during 2017.

In an effort to support scholarships for financially needy students, including high school students, HCC and the Foundation partnered with the Community Foundation of Northern Illinois to create the Million Dollar Matching Scholarship.  Like Double Play, every dollar donated will be matched. The resultant $2 million endowment will provide approximately $80,000 each year in perpetuity for scholarships for students of HCC.

And, as the College has just finished its five-year strategic plan, identifying where it is headed to provide educational services to northwest Illinois, the Foundation will seek to identify programmatic needs and areas for support which can be provided by donors.

Berberet added, “Over the past six years, and because of donor generosity, the Foundation has continued to increase its support and funding for Highland College. Total support – debt certificates, program funds, operational grants and scholarships to students – has increased from $878,646 in 2011 to more than $1,684,000 in 2016.