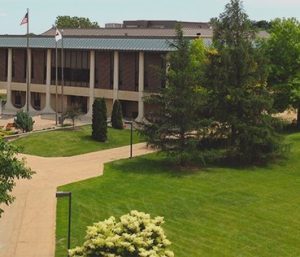 Due to the COVID-19 pandemic, Highland Community College postponed its May commencement and later announced a virtual celebration of graduates. Highland’s spring class of 2020 had more than 200 graduates. During the traditional annual graduation ceremony, the Nursing program would hold a special pinning ceremony for Nursing and Medical Assistant students. This year, the college hosted the ceremony on Aug. 1.

The pinning ceremony was held in the parking lot next to the Natural Science Center/Ray and Betty Stamm Health Science Nursing Wing. With socially distanced seating for the graduates, with family sitting in their cars or on lawn chairs, the ceremony recognized each graduate with speeches from Chris Kuberski, President of Highland Community College and Dr. Jennifer Grobe, Associate Dean of Nursing & Allied Health.

The pinning ceremony is a time-honored nursing school tradition. Often more personally meaningful than the graduation ceremony for nurses, it signifies the official initiation into the brotherhood and sisterhood of nurses. The ceremonies began to include other allied health fields, such as Medical Assisting in the 20th century.

“This year, because the students could not be together in the last eight weeks of class to celebrate together, the pinning ceremony is a final time to join together to commemorate more than two years of hard work,” said Dr. Jen Grobe. “Because of the late date of the ceremony, many students have already passed their State Boards and have secured jobs. This made the day especially exciting.”

Kathryn Cifonie of Freeport was given the DAISY in Training award. The DAISY in Training Award is designed to remind students, even on the hardest days in nursing school, why becoming a nurse is an enriching career choice. It is for those students who exemplify the delivery of clinical care in a compassionate way to patients and their families.

Cierra Martin of Rockford was recognized with the ROSE award. The ROSE Award, which stands for Recognition of Service Excellence, rewards and celebrates the extraordinary efforts and compassion of a student.

To learn more about the Highland Community College Nursing and Allied Health program, go to highland.edu/nursing or call 815-599-3679.