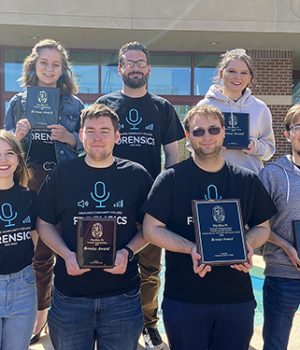 After a strong showing at Phi Rho Pi, a national speech and debate tournament for community colleges, the Highland Community College Speech and Debate Team returned to Highland with several national awards. Five students participated in the week-long tournament in St. Charles, Missouri in early April.

“I could not be prouder of everything this group of students has accomplished this season,” said Harry Bodell, Highland Speech Communication instructor and Speech Team Coach. “Not only did they need to overcome the rigorous amount of work that normally comes with competition, but they had to do so while navigating online and in-person formats both in competition and in their academic lives.”

He adds, “They did so with poise and positivity, and the Highland community can be proud knowing they have been represented on the national stage by outstanding students.”

Phi Rho Pi, the National Junior, and Community College Forensic Association and Honor Society is a non-profit organization committed to increasing knowledge and appreciation of the forensic arts at the junior and community college level. It is one of the oldest forensic organizations having been founded in 1927. Phi Rho Pi offers community college and junior college students the only full-service national tournament in the United States with 11 individual events and three forms of debate competition.