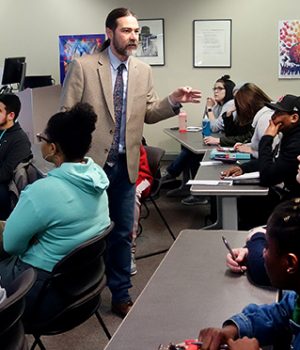 A graduate of Lena-Winslow High School in 1991, Michael Maher admits he was not a good student, had no idea of where his life was headed but was expected to go to college. He enrolled at Highland Community College. He said, “I was academically lost.”

“Highland saved my life,” Maher said. “Had I attended a university, I would have failed. Highland gave me the type of exposure of what was available to me. My instructors gave me their time, their guidance and when I graduated in 1993, I was headed to Western Illinois University, and I knew I wanted to teach at a community college when I finished my degrees.”

Maher received his bachelor’s and master’s degrees in sociology from Western Illinois University. He then began teaching sociology for Spoon River College at the Macomb campus. This year marks 25 years of teaching at a community college. He credits Highland Community College for giving him a foothold on his academic career, and said, “There are a lot of students that are unsure when they graduate high school.”

He adds, “Having community college experience from student to instructor, I feel Highland helped me make an informed decision at a time in my life that was crucial. The faculty at Highland gave me life skills from their classes. It is exactly what I needed then, and what I try to give to my students.”

Maher was one of the nominees for the 2021 Illinois Community College Trustee Association (ICCTA) Full-Time Faculty Award sponsored by ICCTA. The award honors teaching excellence, the ability of a teacher to take a personal interest in students and to inspire enthusiasm through their teaching techniques.

This is the second time Maher has been the ICCTA nominee. He has also been honored twice with the H. Truman Standard Award for teaching excellence, in 2006 and 2016.

Maher said his focus is on social problems and inequality issues as they relate to race and gender, and his teaching style is often described by students and colleagues alike as passionate. He doesn’t disagree with that, and it may be because education itself is something Maher passionately values.

“Learning is often thought of as a purely cognitive exercise, but learning is also a deeply emotional experience. Faculty who successfully fuse the cognitive and the emotional components of learning are better equipped to teach in ways that are meaningful and life-changing,” he said.

Maher’s passion for community college education extends beyond the college he teaches at, becoming involved in his community. Maher has guest lectured at WIU and has been involved with the Unitarian Universalist Fellowship in Macomb. Maher has also offered community education classes in Canton and Macomb.

“Education is a vehicle to a better career and overall quality of life, but education means so much more than a career path or income. Education leads to thinking, informed decision-making, questioning, and changing our minds. I want my students to be professionally successful, but more than that, I want my students to discover what they are passionate about, what they care about, and what matters to them,” said Maher.

Maher is the son of the late Richard Maher and his wife, Mary, who still lives in Lena. Maher has two older brothers, Patrick and Daniel, who graduated from Highland Community College.