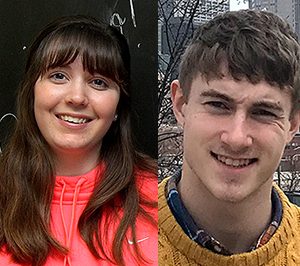 Carson Meyers was awarded $350 for her submission as a Highland student. She graduated from Highland Community College in May with a 4.0 GPA and will attend the University of Illinois in Springfield to study English.

Andrew Lorig, a graduate of Pearl City High School, was awarded $250. He plans to attend Mount Mercy University in Cedar Rapids, Iowa with a long-term goal to become a physician.

Both winners wrote about Addams’ concept of a true democracy, which she has been known to say was moving “forward or in retrograde together. None of us can stand aside; our feet are mired in the same soil and our lungs breathe the same air.” Jane Addams fought for children’s rights for education and literacy in a time when child labor was rampant.

Addams is best known for establishing the Hull House, near West Side of Chicago which opened in 1889 with the goal of providing the poor, working-class immigrants in the neighborhood with social and educational opportunities. Hull House became a model for more than 150 settlement houses subsequently built throughout the nation. Regular events were hosted at Hull House which attracted well-known artists, authors, musicians, academics, feminists, politicians and reformers who studied and emulated her work. She won the Nobel Prize for Peace in 1931.

Addams died in 1935 and was buried at her request in the Cedarville Cemetery. She was the eighth of nine children born to an eight-term Illinois State Sen. John H. Addams. Mr. Addams ran a mill in Cedarville, was President of Freeport Second National Bank and had many important friends, including President Abraham Lincoln.