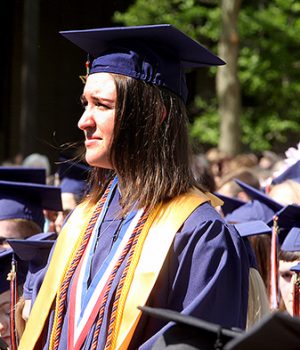 The northwest Illinois community and friends of Highland Community College are invited to join the 2018 graduates and their families as they celebrate the 55th annual Commencement Ceremony at 10 a.m. on Saturday, May 19, 2998 W. Pearl City Rd., Freeport, Ill.

The ceremony will be held outdoors on the HCC campus in Freeport. Commencement will take place in the courtyard between the Marvin-Burt Liberal Arts Center and Natural Science Center. Guest parking is located in lot D on the south side of campus outside of the Natural Science Center/Ray and Betty Stamm Health Science Nursing Wing.

Jeffrey Musgrove, DBA, MA, will address the class of 2018. He is vice president for the Division of Adult Higher Education at Columbia College. He began his academic career at Columbia College as the program coordinator at the Patrick Air Force Base location, which started out as a teaching site for the Orlando campus in Florida. In 2002, Jeff became the inaugural director for the Columbia College campus at Patrick Air Force Base. In 2007, he was promoted to Regional Director for the Southeast Region, an area that encompassed eight campuses in Florida, Georgia, and South Carolina and Guantanamo Bay Cuba. In 2014, Jeff was promoted to Vice President for the Division of Adult Higher Education. Prior to coming to Columbia College, he was the technology specialist for Endeavour Elementary School, Brevard County School District in Florida. Jeff spent 20 years in the United States Air Force. He finished his Air Force career as the First Sergeant for the Security Forces Squadron, Patrick Air Force Base.

Holly Morton of Monroe, Wis. will give the Student Commencement Speech. She is a physics major at Highland Community College and plans to pursue a degree in astrophysics at Washington State University in the fall.

The College is expecting a large number of participating graduates; as such, guest seating will be limited and available in the order of arrival.