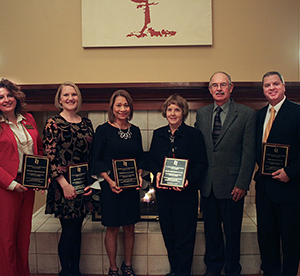 On November 8, the Highland Community College Foundation recognized six individuals as Distinguished Alumni during the annual ceremony held at the Freeport Club in Freeport.

This is the 24th year the awards have been presented to individuals who have shown community leadership, made their start at Highland Community College and believe in the mission of higher education. Including these new recipients, the Highland Community College Foundation has recognized 130 individuals have been recognized as Distinguished Alumni.

The following were recognized:

Kristin Stinnett of Polo is a 2007 graduate from Highland’s Automotive Mechanics program. During her time at Highland, instructors, and classmates quickly recognized her skill level, dedication to education along with her willingness to assist others. Kristin attended Southern Illinois University – Carbondale (SIU-C) where she completed her Bachelor’s Degree in Automotive Technology and her Master’s degree in Workforce Education.

Kristin, who became a Highland instructor in 2018, brings two years of teaching experience from SIU-C to her current role of Automotive Technology Instructor at Highland Community College. Kristin has 12 years of Technician level experience and six years of corporate level work related experience. These are excellent accomplishments for anyone, but maybe more notable being a female in a heavily dominated male career pathway.

Kristin has embraced the barriers and has paved the way for others by demonstrating commitment and professionalism. Kristin is the next generation of Automotive Technicians who will lead and inspire others to succeed just as she has done.

Both Alan and Sherry Flack of Shannon graduated from Highland with Associate of Science degrees. They both attended the University of Illinois. Alan completed his Master’s degree in Agriculture and Sherry completed her Bachelor’s degree in Social Work. Sherry is also a graduate of the Highland Leadership Institute and throughout the years, Alan has taught classes at the college.

Sherry served at the Stephenson County Senior Citizen’s Center until 1997, when she took over as secretary/treasurer of the Flack Farm Corporation. Sherry has volunteered for Eastland School District as a board member, tutor, and co-founder of the “Bugs and Buds” program, which she led for the district.

Alan and Sherry have farmed throughout their 43 years of marriage. They have two children, Tom and Rebecca, who have followed their great leadership; starting with their education at Highland Community College.

Pennie Groezinger of Stockton is a sixth generation Jo Daviess County resident who is deeply invested in Northwest Illinois. Pennie is a community and business leader, which was reinforced by Stephenson, Carroll, Jo Daviess, and Ogle County voters as she won the election for the 2017 Highland Community College Board of Trustees. Pennie also serves as a Township Trustee at Wards Grove, a member of the Stephenson County Local Emergency Planning Committee, and Stockton Strong Community Development Committee. Pennie holds a professional membership in the Society for Human Resource Management and the Association of Community College Trustees.

As a Highland Leadership Institute graduate with 30 years of experience at Pearl City Elevator, Inc., Pennie continues to lead her team by “modeling the way, inspiring a shared vision, challenging the process, and leading by example.” Pennie is among a group of forward-looking agribusiness professionals who continue to expand the Highland Agriculture program. She is also a member of the HCC Foundation’s Ag Development Committee where she has devoted her time and energy to assure that the agriculture program has the resources for future growth and expansion.

Dr. Mike Schiffman of Freeport graduated from Highland with his Associate’s Degree in 1992 followed by his Bachelors of Science degree from Illinois State University. Embodying the philosophy of lifelong learning, Mike went on to earn a Master’s degree in Administration and Education from Western Illinois University.

Dr. Schiffman began his educational career teaching history. He later served as Dean of Students at Forreston High School, Elementary Principal at Forreston Grade School, and Secondary Principal at Pearl City High School. He served as Superintendent of Schools for Dakota Community Unit School District 201 for five years prior to being named Superintendent of Schools for Freeport School District 145 in 2015.

In addition to his dedication to the education advancement in the region, Dr. Schiffman has served as member on several boards such as noon Rotary, Lions Club, and the Freeport Chamber Board. In 2015, he was elected the Professional Development Chairperson for the Northwest Division of the Illinois Association of School Administrators (IASA), which honored him with the Northwest IASA Exemplary Service to Education Award for his exemplary leadership contributions to Illinois public schools.

Dr. Heather Shick of Rockton graduated from Highland in 2003 with her Associate’s degree. In 2006, she completed her Bachelor’s Degree at the University of Illinois at Chicago. She earned her Doctor of Dental Medicine (DMD) from the University of Kentucky’s College of Dentistry in 2010. Today, Dr. Shick is successfully growing her own general dentistry practice, Above & Beyond Dentistry (ABD) located in Rockford, Ill.

Dr. Shick is committed to providing the best service to her patients and is committed to her community. Above & Beyond has partnered with local businesses to provide numerous charitable events where she has donated dental expertise to those in need. ABD hosted “Dentistry from the Heart” where over $18,000 in dentistry was donated in one day. On Veteran’s Day 2017, she treated veterans to dentistry, breakfast, and personal care.

Her nomination states, “Heather leads by example. She is a dedicated wife, mother, boss, dentist and friend. Dr. Shick is committed to her own personal growth and to that of others. She wants the best for others and wants others to live their best life.”

Cristina Lambert of Dorado, Puerto Rico was born in Colon, Panama and came to the United States in 1968. Cristina began her education at Skidmore College, NY. before moving to Lanark and starting a family. While raising her son and working, Cristina continued her education. After graduating from Highland Community College with honors, Cristina completed her Bachelor’s Degree from Indiana University and then obtained her Master’s degree from Indiana Wesleyan. Her educational achievements were all done simultaneously as she furthered her career.

Cristina started her career in Freeport at the Crum and Forrester mailroom. Later she worked at Continental Telephone Company where Cristina worked hard to reach her career goals. From a Customer Service Representative, Training Coordinator, Area Manager, Director, General Manager of Illinois, VP of Operations – to CEO of Puerto Rice Telephone, Cristina always believed the opportunities she had at Highland helped her reach her success. Now retired, Cristina continues her career as a consultant for Claro Telephone of Puerto Rico. She is also a partner with her son in 1 Spring Events and 218 Property Management & Development. Cristina continues to reinforce the importance of education with her grandchildren.