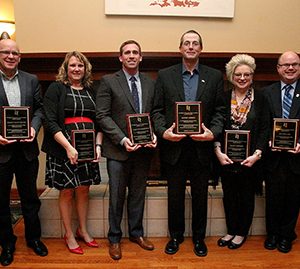 This is the 25th year the Foundation has recognized individuals who have shown community leadership, made their start at Highland Community College (HCC) and believe in the mission of higher education. Including this year’s recipients, 151 individuals have been recognized as Distinguished Alumni.

The following were recognized:

Jolene earned an Associate’s degree in Business Administration at age 24 while working full-time.  She maximized the value of her HCC education and is a natural leader in her workplace and her community. She continued to seek higher education thru the Graduate School of Banking and other professional development opportunities. Jolene worked her way up the ladder at the Forreston State Bank to become Senior Vice-President. Jolene serves on the Highland Community College Foundation. In the past, she served on the Allocation committee for United Way of Northwest Illinois, Warren Chamber of Commerce, and the Sunny Day Preschool Board.

Nominated by Verlo and Ardath DeWall

Curtis graduated from Highland in 1997 with an Associate of Science degree followed by a Bachelor of Science degree in Agriculture from UW-Platteville. As a believer of continuing education, he graduated from the Midwest School for Community Bankers in 2003 and the UW-Madison Graduate School of Banking in 2010. Curtis joined the Lena State Bank in December 1999. Curtis is a member of the Lena Economic Development Committee, Carroll County Farm Bureau, FFA Alumni Association, and works alongside his wife and several friends when needed with the youth group at Shannon Baptist Church.

Joe started his broad road of success at Highland Community College where he graduated in 1997. He furthered his education at Columbia College earning a Bachelor’s degree in Business Administration and Management. Today he is a governance and business finance leader who has significant experience creating vision, brand image, and corporate purpose. Joe serves as the Northwest Illinois Market President for Illinois Bank & Trust. He serves as a Director on Dairyland Power Cooperative, Jo-Carroll Energy, and Association of Illinois Cooperative, and previously served on multiple boards in various leadership capacities.

As a Freeport high school senior, Shary participated in an on-air journalism course where her assignment was “Community Events Girl” finding and telling interesting stories about happenings in and around Freeport. They liked her voice and thus began her 44-year career under the on-air name Shary Gibson. Today, she produces all Stephenson County community affairs programs on WFRL-AM and WFPS-FM. She is also on the air as a disc jockey afternoons Monday through Saturday. Shary enrolled after high school at Highland and graduated in 1977 with an Associate’s degree in Business Administration.

Jim earned his Associate of Arts degree from Highland in 1996. He continued his education at Western Illinois University where he earned a Bachelor’s degree and a Master’s degree in history.  He returned to HCC as an academic advisor to help students choose a path. Phillips later became a history and political science instructor. He became a co-facilitator with Alan Wenzel of the Leadership Institute which he continues to do today. Since 2014, Jim has led the faculty as Dean of the Humanities, Social Sciences and Fine Arts Division, leading the faculty.

Chris attended Highland Community College from 1996 through 1998 and went on to the University of Illinois to graduate in 2000 with a Bachelor of Science Degree in Finance. Since 2002, he has served as an integral part of the State Bank of Freeport’s success. Chris leads the business services team and earned the title of Executive Vice President in 2014. Beyond his day-to-day responsibilities at State Bank, Chris acts as a mentor for young people looking to enter or grow in the financial industry.