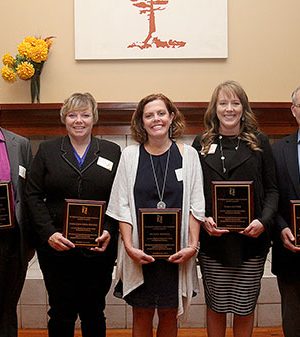 On October 19, the Highland Community College Foundation recognized five graduates as Distinguished Alumni at its annual meeting at the Freeport Club in Freeport.

This is the twenty-third year the awards have been presented to individuals who have shown community leadership, made their start at Highland Community College (HCC) and believe in the mission of higher education. Including these new recipients, 123 individuals have been recognized as Distinguished Alumni.

A graduate of Forreston High School, Tim attended Highland for the 1978-1979 academic year. He then transferred to Bradley University and earned his BS degree in electrical engineering.Â  Tim later completed his master’s degree in electrical engineering at the University of Illinois, while working in Urbana and teaching at the local community college.

For the past 27 years, Tim has worked in various positions in engineering electronics at three corporations, garnering several patents and writing in professional publications.Â  He has served on the board of Habitat for Humanity, managed a Destination Imagination team, coached various sports teams of his children, and stayed involved in his local church.Â

Stacey graduated from Orangeville High School in 1985, and Highland Community College in 1987.Â  In 1989, she earned her BS in Education degree from Western Illinois University.

Stacey’s first teaching job was in Pearl City, where she taught from 1989-1996. After a few years off to care for her young family, she returned to teaching, this time in Orangeville, where she has taught at the elementary level since 2001. She earned a master in curriculum from National Louis University in 2004.Â  Stacey has coached sports and serves as an assigned mentor for new teachers in the district, where she is recognized as a leader and an outstanding teacher.Â

A 1983 graduate of Stockton High School, Colleen began her college education at HCC. Later, after graduating from the University of Dubuque, she landed a position teaching Health & PE at Lanark Eastland High School.

At Eastland HS, Colleen has coached multiple sports at all grade levels, including 24 years as varsity girlsâ€™ basketball coach.Â  She was inducted into the Northwest Illinois Sports Hall of Fame in 2002, and into the Illinois Basketball Coaches Hall of Fame as a career coach in 2016.More important to Colleen than any award or accolade is the influence she has had on the students she has coached over the years.Â

Nominated by Joe and Connie Geiter

After graduating from Orangeville High School in 1999, Tara attended Highland Community College, where she earned her associates degree in 2001.Â  She completed her BS in business administration at NIU in 2003.

Tara has worked in the department of community relations at Kohl’s corporate office since 2004, taking on positions of increased responsibility over the years; she is currently Director of Community Relations.Â  Tara’s work for her company is centered around Kohl’s philanthropic giving programs, including the “Kohl’s Kares” programs.Â  Through Tara’s work, the company is a benefactor to several non-profit organizations and charitable initiatives. She feels that HCC gave her the skills and confidence to accomplish her goals.

Shane graduated from HCC with an associates degree in 1986.Â  He earned a bachelors degree in marketing from Illinois State in 1988.Â  He has worked for the past 17 years at Rockford Mutual Insurance Company, where he is currently Vice President of Marketing and Sales.Â  He has worked in claims, underwriting, and marketing, and is also a Certified Insurance Counselor.

Shane serves on an advisory board in his field at ISU and inspired all three of his children to pursue a college education, two of them at HCC.Â  Shane has been actively involved in his church, school district, community college district, and numerous community service projects through work. 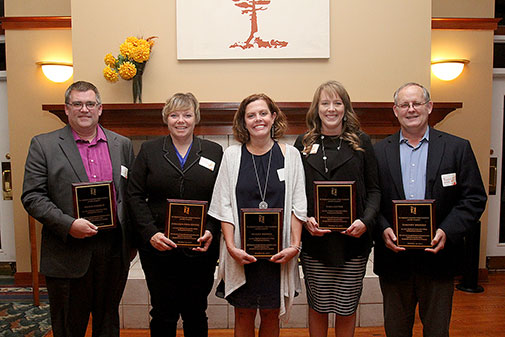