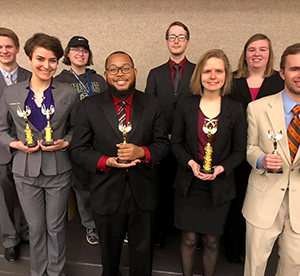 The IIFA State tournament is often described as one of the hardest, most competitive tournaments all year, as students are introduced to teams from across the state they have yet to come in contact with.

“This tournament was tough,” explained Highland Freshman Lucas Boomgarden. “However, the competition seen at State and the critiques we got from the judges will help us prepare for Nationals.”

Team captain and Sophomore Alec Aurand, added, “This was a very challenging meet, but it was well worth it.”

“It was so cool to be back at State and see all the coaches who helped mold me into the educator I am today,” explained Bill Lucio, Public Speaking Instructor and Director of Forensics.

The team is scheduled to travel to Prairie State College in Chicago Heights to compete at their Regional Tournament as they continue to prepare for their National Tournament in Reno, NV in April.

To see the award-winning speeches and performances the HCC Speech Team would like to invite the public to their Nationals Showcase on Thursday, March 28 from 4 to 5 p.m. in the Marvin-Burt Liberal Arts Center, room M-120. For more information about how to join, support, or donate to the Highland Community College Speech Team, please contact Bill Lucio at bill.lucio@Highland.edu.