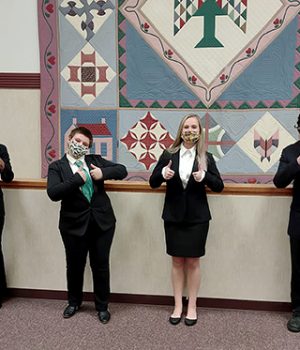 There is no debate about it, this was a challenging and successful semester for Highland’s Forensics team. Since the beginning of October, eight students have been part of the competitive speech and debate team, bringing their share of wins to the College.

“Our students have demonstrated patience and determination along the way, and the adjustment has been relatively painless,” said Harry Bodell, Speech Communication Instructor, and Forensics coach.

The Highland Forensics speech and debate team had several strong showings at digital speech and debate competition over the last few months. Despite the obstacles posed by a complicated year, the team has made a successful transition to online competition, and they have made their mark at several digital tournaments.

“The speech and debate (forensics) season have been both especially challenging and especially fulfilling, which I consider to be the perfect environment to encourage growth,” Bodell said. “While we certainly would prefer to coach, travel, and compete in person, this season’s digital competition format has allowed us to stay safe, engage in the activity that we love, and learn some new skills along the way.”

Hosted by the Lincoln Parliamentary Debate League on Oct. 30