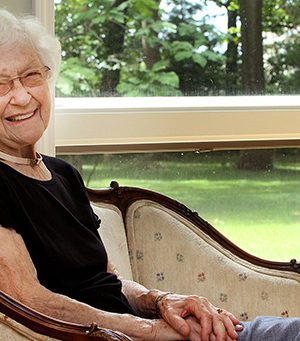 Humble about receiving accolades, Marjorie Phillips lights up when she speaks about past students she and her late husband, Spencer, were able to help when they gave out the first scholarship to Highland Community College students in 1966.

Saying, “Giving is a part of living,” Phillips, 94, remains a key player at Highland Community College by serving on the Foundation board and giving two scholarships each year to top male and female students. Her focus is to make sure students at the top of their class are rewarded for their hard work. Phillips said she wants to encourage students to excel at the next level of academia beyond Highland.

Because of her commitment to Highland, Phillips is to receive the Delbert Scheider Lifetime Achievement Award at the annual Legacy Gala, hosted by the Highland Community College Foundation on October 2.

“I think Highland is the most important thing Freeport has going for it,” Phillips said. “Freeport has slid over the years. Highland hasn’t. The college continues to thrive and offers our students so much. What a gem we have in this college.”

Phillips’s commitment to Highland has been transformational. While she and her husband were not actively involved with the formation of the college in 1962, she has known many of the principal players. She said what drew her and her husband to become involved was the progressive nature the founding members had to take the college from classes at Freeport High School to the campus it is today.

“I grew up in Rochester, Minn., where there was a community college and I know the value education has to so many. So, when Spencer and I decided to see what we could do. We made the first contribution for a scholarship, and each year when I hand that scholarship to a deserving student, I smile knowing giving can make a difference,” said Phillips.

Dr. Spencer and Marjorie Phillips moved to Freeport in 1948, where Spencer set up his medical practice as a surgeon. She worked at his side. Marjorie said she and her husband chose Freeport to live in because of the small community appeal close to larger cities. Freeport is where they raised their daughter Julia and son Spencer Frederick.

Spencer and Marjorie were known for their philanthropy and love of music. Marjorie took over the Freeport Community Concert Association, which has the distinction of being the oldest continuous concert association in the United States. Forgoing a television, classical music plays daily at her home.

When Spencer died in 2002, Marjorie did not stop living and remained active in her adopted community. She lives her passion for promoting the arts and giving back to the community that welcomed her and her husband.

Chris Urish serves with Phillips on the Foundation Board. Urish said what she loves most about Phillips is her big heart, always willing to help out in any way she can.

Urish adds, ”Marjorie believes in our young people and the arts. She wants to make this community a better place for others. She has more energy than anyone else I know at her age.”

Phillips said serving on the Foundation Board is her way of giving back and staying current on what is going on at the college. She regularly attends Fine Arts events, saying, “I don’t like it when people say nothing is going on in Freeport. We have so much in our back yard.”

“I love serving on the Foundation board,” Phillips said. “It’s the best way to stay informed about what is going on. I am humbled by this recognition. I still like having a say about what is important to me, and being able to help others in the process.”

At the Legacy Gala, the Highland Foundation will recognize individuals and corporate partners who demonstrate a shared responsibility in transforming students’ lives through an accessible, affordable, and rigorous learning experience. The fundraising event continues with the traditional dinner, entertainment, silent auction as well as the $5,000 in five minutes for the H.O.P.E. student emergency fund. The silent auction is open and available to everyone, not just the attendees, at highland.edu/foundation/foundation-events.

Photo: Marjorie Phillips is pictured at her home in Freeport