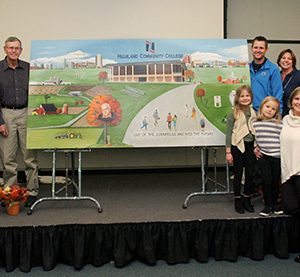 Jeff Reinke, the executive director for the Foundation, praised Scheider’s unwavering optimism and vision, noting that his influence will endure throughout the region.

Reinke said, “Del loved education, agriculture, and Highland Community College. He led with a deep passion that was rooted in a hope for a better future for those around him. As a founding father of the college, he has left a legacy that will impact our community for generations to come.”

Longtime friend, Pat Dunn, director of operations for the Foundation, explained how Scheider’s impact was far-reaching.

“He believed in the power of technology to open doors to economic development. He was adventurous. He traveled the world with his wife, developing and sharing his knowledge of agriculture, irrigation, and conservation,” Dunn said.

The journey began in 2016 with Scheider laying the groundwork for the mural. He envisioned the mural would capture the past, present, and future of agriculture and education at Highland.

Linda Vietmeyer, an artist from Orangeville, was selected to capture Scheider’s vision on canvas. Scheider remained involved with the mural until his death on March 30, 2021.

“Del has played a part in improving the lives of many people through bringing new technology to agriculture, by bringing opportunities for better education through Highland Community College, and opening doors for economic development,” said Dunn. “It feels good to honor my friend. He approved the artist rendering in December 2020. Del’s list was long, with his wishes for the college and diversity in the mural.”

Vietmeyer said she was thrilled to be able to depict the vision for the legacy of Scheider. Vietmeyer spoke at the unveiling of the mural saying, “This is an honor. It was fun, and a challenge. Many pieces were like a puzzle to tell his story.”

Tom Scheider is the son of Delbert. He, his siblings, and other family members were on hand to see the mural for the first time.

The mural will be located in building H on the second floor across from the board room, along with a plaque at Highland Community College, 2998 W. Pearl City Rd., Freeport, Ill.

Photo: Linda Vietmeyer, right, stands next to the family members of Delbert Scheider after the unveiling of the mural created in his honor at Highland Community College in Freeport. [PHOTO PROVIDED BY HIGHLAND COMMUNITY COLLEGE]