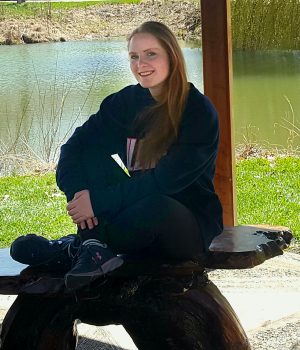 It’s been two years since Emily Freiburger, 20, of Pecatonica, graduated from Highland Community College as a CollegeNow student when she earned her high school diploma from Pecatonica High School and an associate degree from Highland.

As a current undergraduate student at the University of Illinois Urbana-Champaign (UIUC) she is studying Global Studies, living abroad, studying in Vienna, Austria. She is part of UIUC’s “Illinois in Vienna Program” that puts her with a large group of students in a variety of majors. Freiburger’s specific course of study abroad is German, which is also her minor in college.

“My specific program is geared toward learning German, so most of my classes are in German and about German/Austrian culture, politics, and language,” she said. “Living in Austria, specifically Vienna, I have gotten to take a deep-dive into European lifestyle and have seen some incredible differences and similarities to the United States.”

Freiburger cites that while the political systems are different, most people have been kind. She has also had an opportunity to attend many international organizations like the House of the European Union, United Nations-affiliated organizations. She has been in the middle of a hotspot of politics while witnessing the European Union’s new parliamentary vote.

Freiburger said she chose her degree in Global Studies “because it is an interdisciplinary major where I can pick from thematic areas ranging from Global Health, International Environment, Diplomacy and Technology in the international context. My thematic area is ‘Cultures in Contact.’”

With her studies, she must make an advanced level of language of choice, which is German.

“This major has been for meeting new people, listening to new perspectives, and being able to hold a knowledgeable conversation with almost anyone I meet,” she said. “I am part of UIUC’s Model United Nations and have competed and spoken on topics such as Apartheid in South Africa, Nuclear Weapons in Iran, and the United Nation’s Security Council.”

She adds, “While at Highland, I had the opportunity to immerse myself in German from Frau Tracy Mays (Highland instructor), a language that I never thought I would take. It really has pushed me to learn another language, learn about history and culture, and be able to connect to another group of people. Here I am at the University of Illinois and living in Vienna.”

Mays said she is pleased to have been part of Freiburger’s education at Highland, and said, “I am very proud of Emily. I just can’t stop smiling. She has grown so much from the first time I had her in class. I have seen her tackle new and scary adventures from going off to college to studying abroad to earning a Fulbright. It has been a lot of hard work for her, but she accomplished all of this with amazing grace and perseverance.”

Freiburger will end her studies in Vienna at the end of this month. Next up for her is continuing to be part of a program called the Foreign Language Teaching Assistantship program with the Austrian Federal Ministry of Education, Science and Research, with is an offshoot of the Fulbright Program, which offers international educational and cultural exchange programs.

Beginning in October until the end of May of next year, she will be working for the Austrian government at the Forestry School in a town called Bruck as an assistant to their English Department.

“I am supposed to help expose Austrians to native English speakers, but also help them teach about cross-cultural dialogue,” she said. “I will get to experience the Styrian German dialect and become a bridge of cultural understanding between the United States and Austrian.”