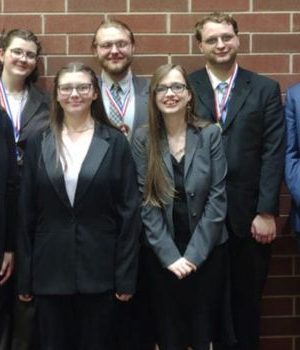 FREEPORT — After two years of predominantly virtual competition, the Highland Speech and Debate Team has been back on the road competing at several in-person tournaments for the fall semester.

Coached by Director of Forensics Harry Bodell and Assistant Coaches Kevyn Sutter and Norah Flaherty, the students have earned a collection of trophies and medals for the College in one of the team’s most competitively successful semesters in recent years. The team, also the largest in several years, consists of second-year returning student Adam Rath, Brooke Allison Parkinson, Olivia Wilhelms, Ruby Snyder, Tabitha Roenneburg, Maddie Eppenstein, Mason McIntyre and Conor Guthrie.

The showing at Elgin Community College was the best of the season. Only four students competed in
the tournament, and Highland managed to compete with the other schools for other overall team
sweepstakes and the quality team sweepstakes. The team is looking forward to keeping the
momentum going in the spring with competitions at College of DuPage, Harper College, Northern
Illinois University and eventually Phi Rho Pi Nationals in Washington, D.C.

New members are accepted all year long, and interested Highland students may still join the team for
the Spring 2023 semester and be part of the fun. Questions should be directed to Director of
Forensics and Speech Communication Instructor Harry Bodell at harry.bodell@highland.edu.