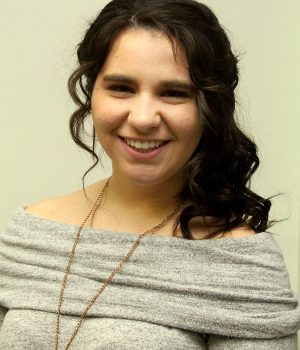 Highland Community College is pleased to announce that Jenna Lafferty of Freeport has been named a 2018 Coca-Cola Academic Team Silver Scholar. She will receive a $1,250 scholarship.

Lafferty is a second-year student at Highland with plans to graduate in May with an Associate of Science degree to further her study at the University of Wisconsin-Platteville in Platteville, Wis. She plans to complete her bachelor’s degree in Bio-Chemistry. She is also a member of the Phi Theta Kappa Honor Society at Highland Community College.
The Coca-Cola Scholars Foundation sponsors the Coca-Cola Academic Team program by recognizing 50 Gold, 50 Silver, and 50 Bronze Scholars with nearly $200,000 in scholarships annually. Each scholar also receives a commemorative medallion.

Students are nominated for the academic team by their college administrators. Selection is based on academic achievement, leadership, and engagement in college and community service.

Phi Theta Kappa is the premier honor society recognizing the academic achievement of community college students and helping them to grow as scholars and leaders. The Society is made up of more than 3.5 million members and nearly 1,300 chapters in nine nations. Learn more at ptk.org.