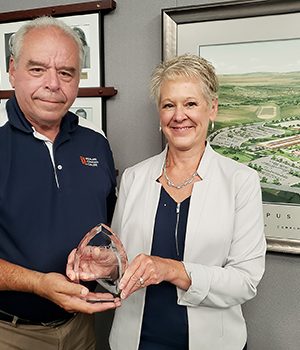 Highland Community College Trustee Jim Endress of Shannon received the 2021 Ray Harstein Trustee Achievement Award from the Illinois Community College Trustees Association (ICCTA) at a banquet held in June in Bloomington, Ill. The award recognizes exemplary service by a currently serving community college board member. Endress also serves as chair of the Highland Board of Trustees.

Endress said he is proud of the work he has done serving on the board for the past 14 years, adding, “I feel like as a board member I helped make a difference, and Highland is a huge asset to northwest Illinois.”

Endress followed in the footsteps of his father, Dennis Endress, when he joined the Board in 2007. He has solidified his reputation as an outstanding communicator, financial steward, problem solver, and advocate. Endress has provided invaluable leadership as the board chair and has offered vital insight at the state level as Highland’s representative to the ICCTA Board of Representatives. In 2017-18, he was elected by his peers to serve as president of the ICCTA board. On the national level, Endress has served as an ambassador for ACCT’s annual conference.

“I didn’t know much in the beginning but then I served as regional chair, got actively involved, and gained so much from other individuals,” Endress said. “I am standing on the shoulders of previous winners and the leadership they brought to their community colleges. It’s an honor to be part of that group.”

Endress was nominated in February by the Highland Board of Trustees.

“I have found Jim’s commitment to the community college system and the students it serves is tireless,” said Douglas Block, senior trustee on the Highland Board of Trustees. “This award reflects the passion Jim has for education, not only for the Highland District but at the state level.”

Endress’ contributions to community life are far-reaching. His spirit of volunteerism and his vast life experience, and impressive career in agriculture, education, and banking mean he is an asset in the board room, but he’s also happy working with kids on a dusty baseball diamond as a volunteer coach. Highlights of his community service include Shannon Fire Protection District Trustee; Stephenson County Fair Association; Shannon Youth Baseball Association Volunteer Coach, and, Stephenson County Extension Council.  He is also a member of the Bethel United Methodist Church.

The Ray Harstein Trustee Achievement Award was established in 1992 by the Illinois Community College Trustees Association. The award is named for Ray Harstein, who was the founding chair of Oakton Community College. ICCTA is an organization that provides legislative advocacy and educational opportunities for community college boards.

Photo: Chris Kuberski, president of Highland Community College, right, hands the Ray Harstein award to Jim Endress following a meeting of the Highland Board of Trustees.