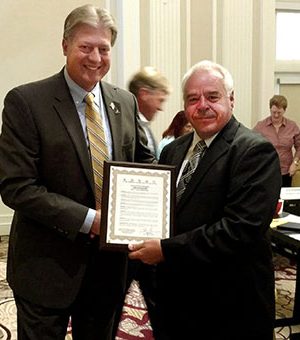 Jim Endress, Highland Community College trustee, was recently honored for serving a one-year term as president of the Illinois Community College Trustees Association (ICCTA) during the 2017-2018 year. At the September 15 meeting of ICCTA, held at the Pere Marquette Hotel in Peoria, IL, Endress was honored with a resolution recognizing his leadership as president, which included lobbying the Illinois General Assembly for sufficient operating funds for the state’s community colleges.

Endress was also honored for contributions to ICCTA, including:

“President Endress stands as a model of public service who brought honor to his home institution, Highland Community College, through his leadership of ICCTA,” said Fritz Larsen, current president of ICCTA.

Endress, who has also served as past treasurer and vice president of ICCTA, said, “I am humbled and honored to have been selected by my peers to serve ICCTA and its membership. As immediate past president, I will continue serving on the executive committee for another year. I will remain actively involved in ICCTA, along with 10 active past presidents. Together we have a lot of history and wisdom to share with ICCTA and the community college trustees it serves.”

Endress has served on the Highland Board of Trustees since 2007. He lives in Shannon, Ill. with his wife, Deborah.