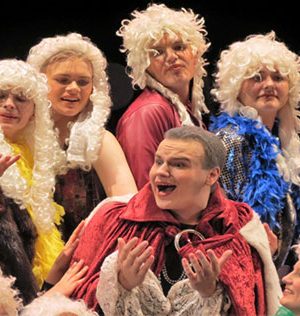 Get ready for a night of musical comedy with the Kaiser Karl-School Theatre Group from Itzehoe, Germany at 6:30 p.m. Tuesday, July 24 in the Fine Arts Theater at the Ferguson Fine Arts Center located at Highland Community College, 2998 W. Pearl City Road in Freeport, Ill.

The Theatre Group will perform a new version of Jacques Offenbach’s The Bandits, an entertaining and satirical operetta that deals with thieves, police, and financiers.

The Theatre Group of the Kaiser-Karl-School comes to Highland from Itzehoe, a city in northern Germany, about 30 miles from Hamburg. The touring group of 37 people includes actors ages 14-24 as well as an adult production team and director Doris Brandt-Kühl, who has lead the group since 1976. The Theatre group has made five previous tours of the US; Freeport is the final destination of their four-city 2018 tour.

This unique cultural opportunity is free and open to the public. It is part of the Blue Lake International Exchange Program.