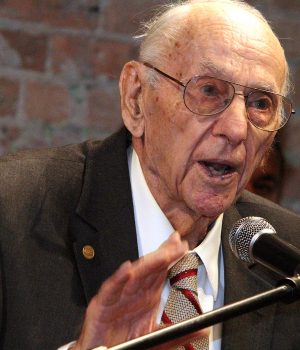 From cornfields to college classrooms, Delbert Scheider was a venerable presence throughout Northwestern Illinois. The 95-year-old Lena resident, who passed away in his home on March 30, 2021, was many things to many people—World War II veteran, farmer, family man. At Highland Community College, trustees and administration also remember him as a founder and friend.

President Christina Kuberski recalled Scheider’s speech at the inaugural Foundation Legacy Gala in 2019, when the Highland Community College Foundation honored him with the Lifetime Achievement Award—an annual recognition that now bears his name.

“Hearing Del share the story of Highland’s inception had a profound impact on me. He spoke of the vision that he and the founding trustees shared to provide a local opportunity and access to education. His vision and passion for Highland Community College was evident in his words, but more importantly, in his actions. His commitment to Highland never wavered and was demonstrated through his gifts of time, talent, and resources,” said Kuberski.

Scheider was a member of a small group who collaborated with then State Rep. Marvin Burt in hopes of bringing a community college to Freeport. Their vision led to the opening of Freeport Community College in 1962, which eventually was renamed Highland Community College—a center for higher education that flourished among the fields of Stephenson County.

“We had no colleges around here. People in high school were not going to college because they didn’t have a college to go to,” Scheider recalled in a tribute video the Foundation produced for the Gala. He and the other founders recognized this as a transformational opportunity for area students, the local economy, and future growth.

While his occupation was first and foremost a farmer, Scheider fostered a deep passion for education throughout his life. The Iowa State University graduate served as a substitute teacher for science and agriculture in Orangeville, and he also provided adult education services through the University of Illinois Extension.

“Del valued education. As a farmer, he was a leader in conservation and agriculture. And while one might not think of him as an educator in the most formal sense of the word, he honestly served as an educator his entire life,” said Jim Endress, Highland Board of Trustees Chair.

When Endress worked at the University of Illinois Extension, he developed a program to teach farmers how to preserve the family farm. He searched for a farmer who had gone through the process of passing their farm from one generation to the next. He will never forget how Scheider and his family were willing to sit on a panel and share their experience.

“Everybody walked away that day with such a wealth of information,” said Endress, who added he was never able to replicate that exact experience in other workshops he hosted in other communities because he never again found someone willing to share their experience.

“But that was the educator in Del,” Jim said.

Indeed, Scheider’s impact on Highland did not end in 1961 with the passing of a referendum to establish a community college in Freeport. He was elected to serve on its board from the beginning. And Scheider was a current and valued member of the Highland Foundation Board until his passing.

Dave Barton, Foundation Board Chair, said Scheider’s presence will be greatly missed around the table.

“Del, and many of his generation, were men of vision who not only had big ideas but the will and ability to make dreams come true,” said Barton.

Jeff Reinke, the Executive Director for the Foundation, praised Scheider’s unwavering optimism and vision, noting that his influence will endure throughout the region.

Reinke said, “Del loved education, agriculture, and Highland Community College. He led with a deep passion that was rooted in a hope for a better future for those around him. As a Founding Father of the College, he has left a legacy that will impact our community for generations to come.”

Pat Dunn, Director of Operations for the Foundation, explained how Scheider’s impact was far-reaching—a force that she felt both personally and professionally.

“I wouldn’t be here at Highland if it wasn’t for the vision of Del and six others,” Pat said. “I’ve known Del for 30 years. I started as a student, then a student worker, then secretary. I eventually became friends with Del and his wife, Hulone.”

Dunn described him as a mentor, a visionary, and a steward of the land. She explained that Scheider’s willingness to share knowledge was matched only by his thirst to learn.

“He believed in the power of technology to open doors to economic development. He was adventurous. He traveled the world with his wife, developing and sharing his knowledge of agriculture, irrigation, and conservation,” she said.

Dunn will miss her weekly chats and rural road trips with her longtime friend. She fondly recalled a recent drive where Scheider requested her to venture off-road onto his farmland and follow the fence line to the top of a ridge.

Which she did. And it worked, though her car was sporting remnants of the field when it reemerged onto the road.

While many at Highland’s campus continue to mourn the loss of their friend, they are also taking the opportunity to embrace the inspiration, energy, and ambition he brought to the college.

“As Highland considers our post-COVID state, we have the opportunity to re-imagine what Highland can be and how we can serve the needs of our students and the district at large. My hope is that we will have a transformative vision like Del’s and the wisdom and courage to act upon it,” said Kuberski.