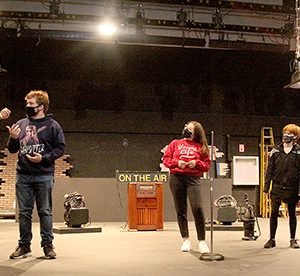 Live theatre returns to the Highland stage with “The War of the Worlds: The 1938 Radio Script” play for the fall production of the New York’s Mercury Theatre broadcast. The broadcast sent the nation into panic mode when listeners thought the radio broadcast fiction was a fact.

The play is based on the 1897 novel by H. G. Wells. Adapted by Howard E. Koch, co-writer of the movie “Casablanca,” and directed and narrated by Orson Welles, the original script details the frightening tale of an extraterrestrial invasion. Highland steps into the dark side of fiction with the stage production that will take the audience on a rollercoaster ride, complete with the sounds of an invasion.

“The novel, ‘War of the Worlds,’ by H.G. Wells has inspired radio broadcasts, movies, and a television series,” said Laura Early, director and Theatre Arts instructor at Highland. “The 1938 radio broadcast by Howard Koch remains thrilling. We are producing a live in-person theatre production of the radio play. We invite audience members in the theatre to use their imagination and go with us on that journey of an alien invasion.”

Many are familiar with the 1938 Orson Welles radio adaptation that drove listeners into a frenzy, thinking that fake news bulletins about the landing of Martians on earth were real. That production, which was set in New York and New Jersey in 1939, was intended to scare people on Halloween eve.

Back then, H.G. Wells’s “Martian cylinders” appeared to resemble zeppelins, and the travesty of the exploding Hindenburg on May 6, 1937, had occurred just a year-and-a-half before the radio broadcast.

Heath Atz plays a scientist in the play who studies the stars and the closest planet to the Earth, the planet Mars.

“The War of the Worlds play is very terrifying, which makes it more fun to act out on stage while incorporating some styles of humor, sadness, and confusion along with the terrifying moments in the show,” Atz said. “I had not heard of the play before, and when I found out more about it, I was eager to get up on stage and start acting it out, as it sounded like a challenge to learn.”

With memories of that New Jersey disaster still fresh in people’s minds (and witnessed on newsreels of the time), “The War of the Worlds” studio broadcast took on new horror. Visions of destruction and calamity played in the listeners’ imagination as the (presumed) invasion and destruction of the planet seemed to be occurring in real-time.

Rawley Schulz is appearing in the stage production and stepping onto the Highland stage for the first time. Schulz said he heard about this play from his older brother Ramsey Schulz, who performed in the same play at Loras College in Dubuque, Iowa. Schulz said when he learned about the Highland production, he knew he wanted to be a part of it.

“This show is a very eerie listen,” Schulz said. “The main character I play is a news reporter named Carl Phillips who was first on this scene of the landing giving his terrified commentary. I also have a few tiny roles to keep the show moving. I am excited to see how this play pans out and hope that everyone will enjoy it.”

Performances are at 7:30 p.m. Thursday, Oct. 7, Friday, Oct. 8. and Saturday, Oct. 9 in the Ferguson Fine Arts Center, 2998 W. Pearl City, Rd., Freeport, Ill. Call 815-599-3718 or visit the Box Office web page at highland.edu/boxoffice to purchase tickets. Phone and online tickets sales will end at 5 p.m. on Friday, October 2. In-person tickets sales are open from 1 to 5 p.m. Monday through Friday at the Box Office, located in Ferguson Fine Center (Building F). The box office is closed for ticket sales on the evening of performances.